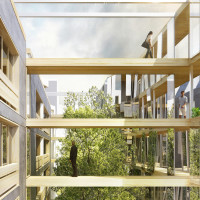 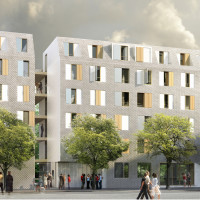 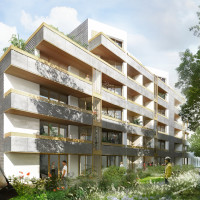 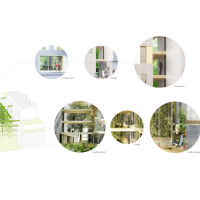 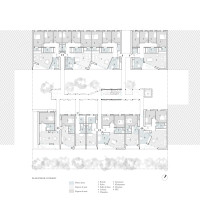 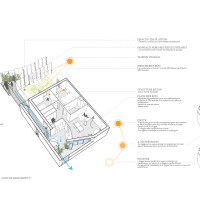 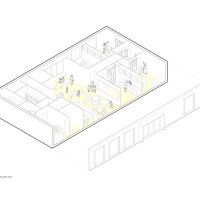 The project discusses the notion of “living within the heart of a housing block”:
– All the housing units are crossing apartments, with the living room placed on the south façade and the sleeping rooms on the north façade.
– The corridors are distanced from the housing blocks so as to create common and open circulation spaces making you and your neighbors friends in no-time.
– The apartment volumes are entirely free and extend to the south in the form of loggias, balconies and winter gardens.
– The simple expression of the façades is adapted to solar orientation and the surround environmental: hollow facing the gardens, and sleek facing the street. The North façades are composed of regular openings which are possible to be rendered opaque with wooden shutters.
In order to maximize sunlight, these shutters can also be used as reflectors. The South façades are inclined in order to enjoy the sunlight whilst being protected from summer’s stronger light.
The corridors in the heart of the housing block participate in a social movement to promote individual happiness and wellness with the help of omnipresent plant life.
The project proposes a new « vivre ensemble » in respect to a new cityscape dominated by greenness.