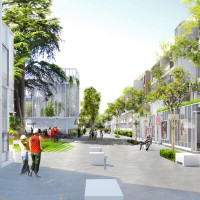 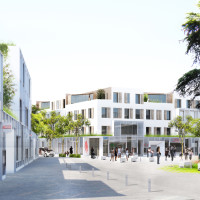 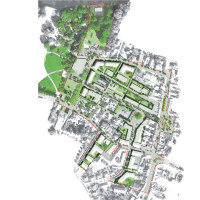 The ambition of the project is to transform the urban development zone into a dynamic neighbourhood which rekindles old ties with the historical city center with the arrival of a major transformation: the tramway.

This intervention is equally marks the occasion to redefine the public spaces by re-considering the place of the pedestrian without banishing the car, to create a mineral space in commercial areas whilst integrating plant life as a major characteristic.

The heritage of certain grand and very old trees are elements that will help anchor the intervention in a natural and historical site.

The dialogue between historical buildings and new construction must permit the onlooker to visualize an urban stitching which will give an identity to the city center in regards to the arrival of the tramway.

The project bases itself upon the masterplan but presents a coherent development plan for the city center of Beaucouzé.

The main idea is to create a sustainable and convertible project that reconciles the mesh of small streets shared by pedestrian and cars alike with an overall permeability of the neighbourhood.

In the perspective of an ecologically sustainable development, the architecture and its implantation are conceived in order to enhance this evolution.

The project stand the idea of a “non-pastiche” architecture with urban forms adapted to a way of life, a climate, a place.

The facades bring a rhythm into the place while creating a strong identity to the architecture, revealing the neighbourhood.

The buildings located on the outskirts of the islet mark the walls of the “Clos du Bourg” by following the layout of the streets. They fit in the continuity of the city buildings, highlighting noble materials such as stone and follow an attic and slate roof typology. The buildings located within the islet follow the orchards’ thematic. Taking back the parcels’ strips orientation, the contemporary buildings contrast with the surrounding.

The facades are in extension of the landscaping of public spaces while the vegetated roofs improve thermal comfort and rainwater management.