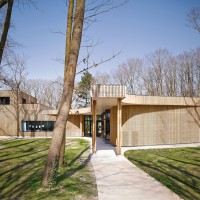 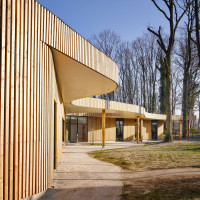 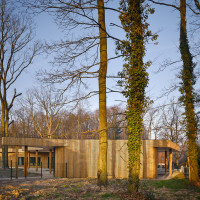 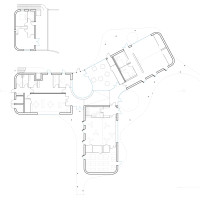 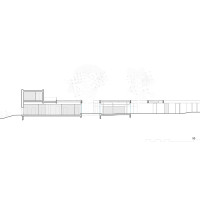 For a good number of years, the children of Briis-sous-Forges have had the chance to have their school placed in the middle of the forest. From a very young age, they learn to observe the changes brought on by the seasons, to smell the humus of the undergrowth, to benefit from the open sky in the clearings, or to notice the slow dance of the tree shadows around their classrooms. Since the Children’s House was finished in novembre of 2013, the vision of the architecture in the heart of the forest has become all the more compelling as nature continues its growth around it. Walking in the area, you might notice how the curved lines of the building accompany your footsteps in between the trees. You might sense the strength of the trees that grow through the building, in the circular patios. But you will surely feel the density and verticality of the forest in the curved clapboard wood façade that enveloppes the entirerity of the structure. For children and adults alike, the building reflects the playful and poetic nature of the forest, in which it sits.