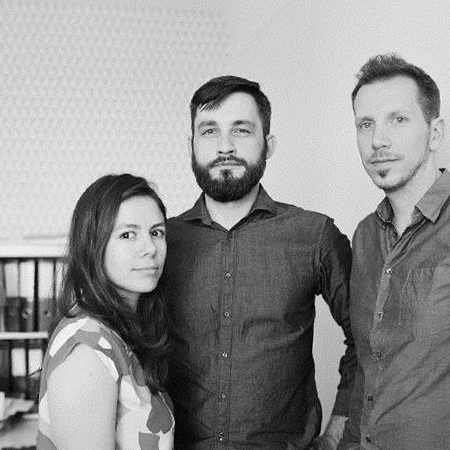 Maïra, Ludovic and Grégoire meet in 2002 on the campus of the California Polytechnic University. Their ways drawn by a lot of projects in common will construct quickly a road that will take them to the foundation of the agency MU during spring 2009.

From the beginning of his creation, the team MU insisted on the quality of the exchanges between the players of the project and the users.

In order to reply to the requirements of the project, and to encourage the explorations, MU took the opportunity of surrounding itself with numerous partners with a known expertise. A little bit more every day, it strengthens its partnerships project management team coherence, putting in synergy every skill and creating constant emulations.

After 6 years of existence, MU has already completed lot of projects as a “Fertile” House, a Bio Cooperative shop, two sport centers with their solar walls, a Children House which received a prize from the government for its innovation, a sport venue, a fire station,  and many others.

The office is currently working on several public institutions as a media library but also on several housing buildings as two wooden constructions or two large housing blocks with an experimental 70 apartments tower in Paris (with XTU office) selected by a jury of experts.

MU has been invited to many public competitions and took part to workshops as the “unsustainable architecture” conference, during the 10th architectural Biennale in Sao-Paulo.

The office received in 2012 from the French Cultural Ministry the prestigious price of “Les Albums des jeunes Architectes et paysagistes” (AJAP) which reward every two years the young emerging architecture and landscaper offices.

Graduated in 2006, Maïra took the opportunity during her formation for going deeper into the social aspect of architecture and urbanism. She bases her work on her double culture Franco-Brazilian, specifying her specialization on the city of Brasilia, utopic modern capital.
After having worked for several agencies like Opera in Paris and Arcanum Architecture Inc. in San Francisco, she collaborated for three years as project manager in the agency Archicop Groupe, that is engaged in some big urban development projects and housing operations in Ile-de-France.

Besides, Maïra did participate to many researches and competitions, in order to make her career richer. She participated to workshops (in San Francisco – Urban Design Research with the AIA, and Detroit – Shrinkingcities). She studied some expression and analysis specific ways such as the video, indeed she realized, with the financing of the Fondation Besnard de Quelen the short movie on the city of Brasilia called “The invisible town”, which will win a special distinction of the jury.

Graduated in 2005, Ludovic quickly orientated himself on the liberal profession way, collaborating as project manager for the agency Wonderland Production on private command in the center of Paris and competitions for public equipment.

His career has been punctuated by some professional experiences in foreign countries; in Tokyo in the studio Bow Wow ans in San Francisco in the agency Holt Inshaw.

Ludovic developed in parallel a taste for the exploration, with the desire of construct a critic point of view on the generic question of architecture. He answers at many competitions, for which he is distinguished repeatedly. He participates to workshops in San Francisco, in Paris and in Detroit. He travels through North and South America, with the support of the Fondation Besnard de Quelen and Lounsbery-Hamburger, to understand the urban systems at the heart of the geopolitical tensions.

In 2012, he teaches as part of a studio of project in the Ecole Spéciale d’Architecture in Paris.

Graduated in 2007, Grégoire chose to end his French program by three years at the Universität für die Angewandte Kunst in Vienna, where he discovers in the studios of Wolf D. Prix (Coop Himmelb(l)au) and Greg Lynn (Greg Lynn Form) some methods of conception and drawing exploring the field of mathematics and digital technologies.

In his return, he completes his professional experience in the agencies RFR, Search, Rev, RH+ and Renzo Piano BW, where he worked on several projects of public equipment, and in particular on the Opera and National Library of Greece.

He travels in China and in Europe, with the help of the Fondation Besnard de Quelen and the grant Zellidja, for a comparative study of the urban density in Europe and in China.

He realizes, with Ludovic, a short movie about the density “Organic HK” prize-winning and presented in several festivals of architecture.